What do you need help with?

Search the knowledge base, browse our resources and visit our forum for more detail information

The older version of the KoboCollect App refers to v1.30.1 and below.

KoboCollect is an open-source Android app for collecting survey data. It’s one of two ways that you can collect data through KoboToolbox (the other way is through web forms - Enketo). It’s free and users with Android versions below 5 can install an older version of the app through the KoboToolbox GitHub Repository.

Setting Up the Server Connection¶

The first step after installing KoboCollect on your device is to set up the server URL, Username, and Password, which connects your KoboCollect app to the KoboToolbox server. This allows you to download deployed forms from KoboToolbox to your mobile device and also send data collected through the app back to the server.

The server in KoboCollect can be configured in two different ways: manually or through a QR code. 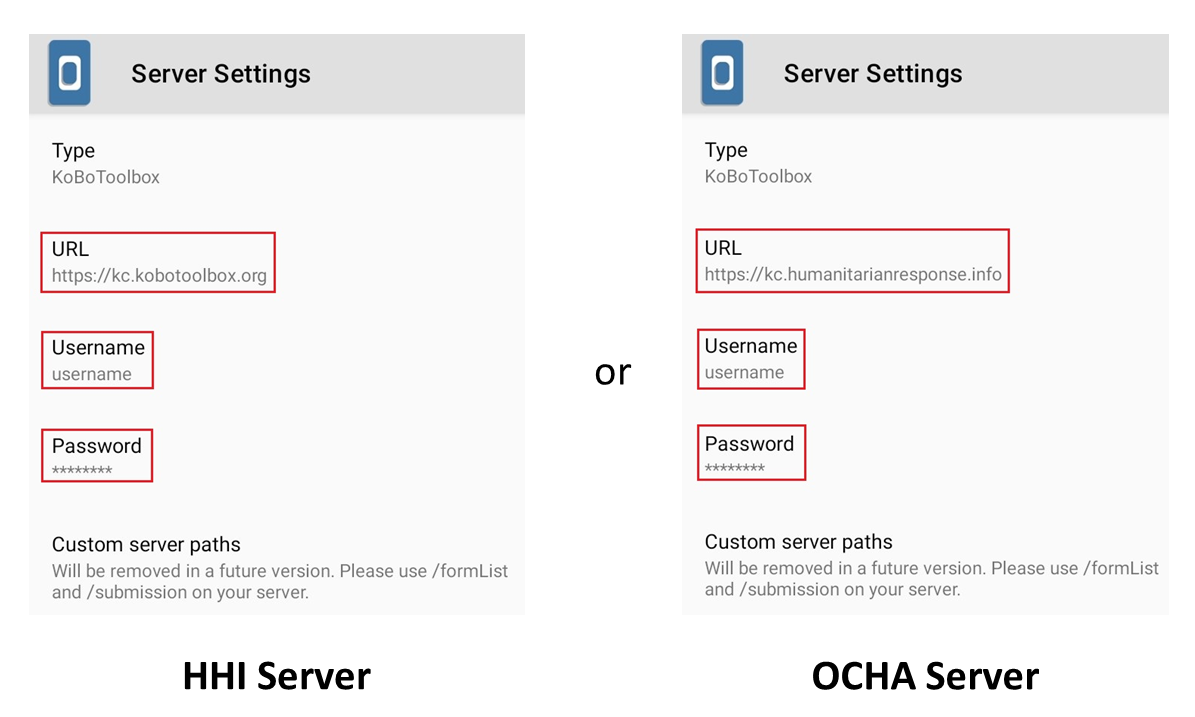 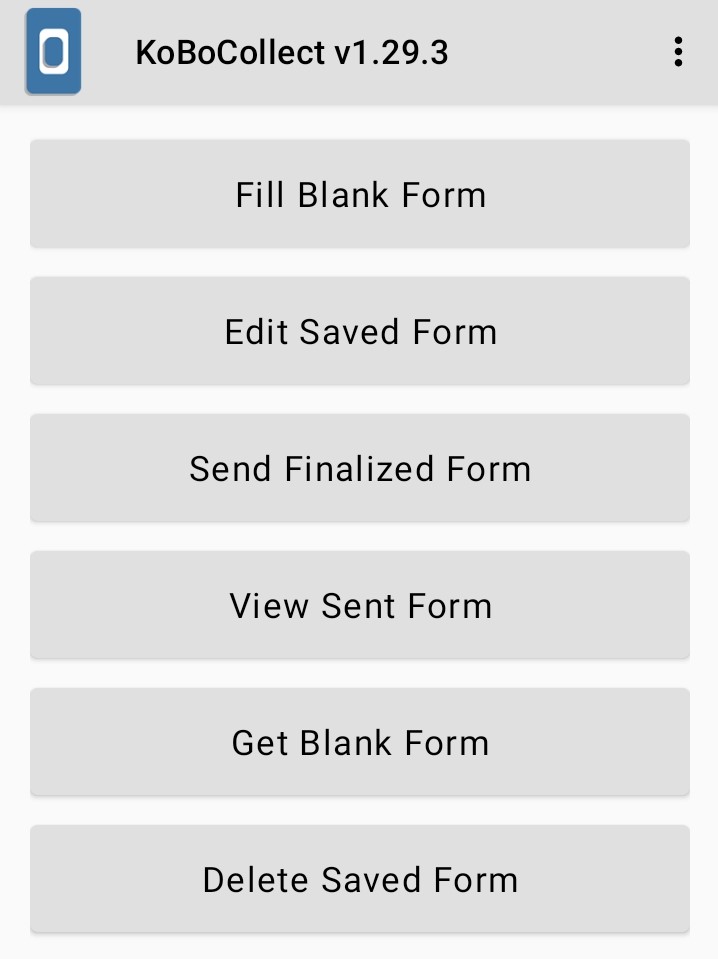 Setting up server connection with a QR code¶

Oftentimes, users in large projects will need to set up a large number of devices under the same server settings (URL, Username, and Password, etc.). Setting up all the devices manually would be time-consuming and prone to error. To save time, you can configure just one device manually and then copy the settings through a QR code generated from the first device.

To set up a device with a QR Code, you will require at least one app that has been set up manually. 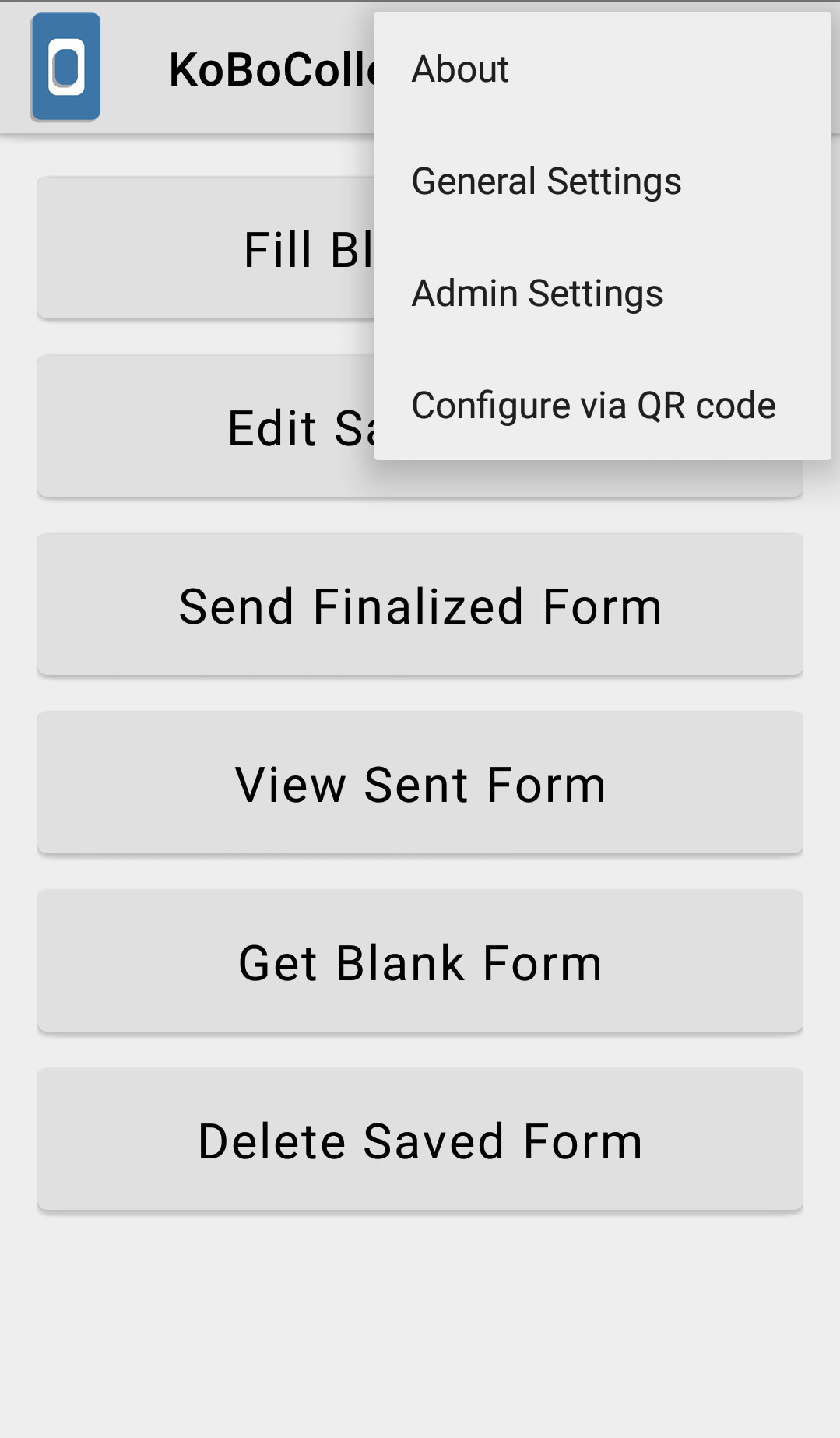 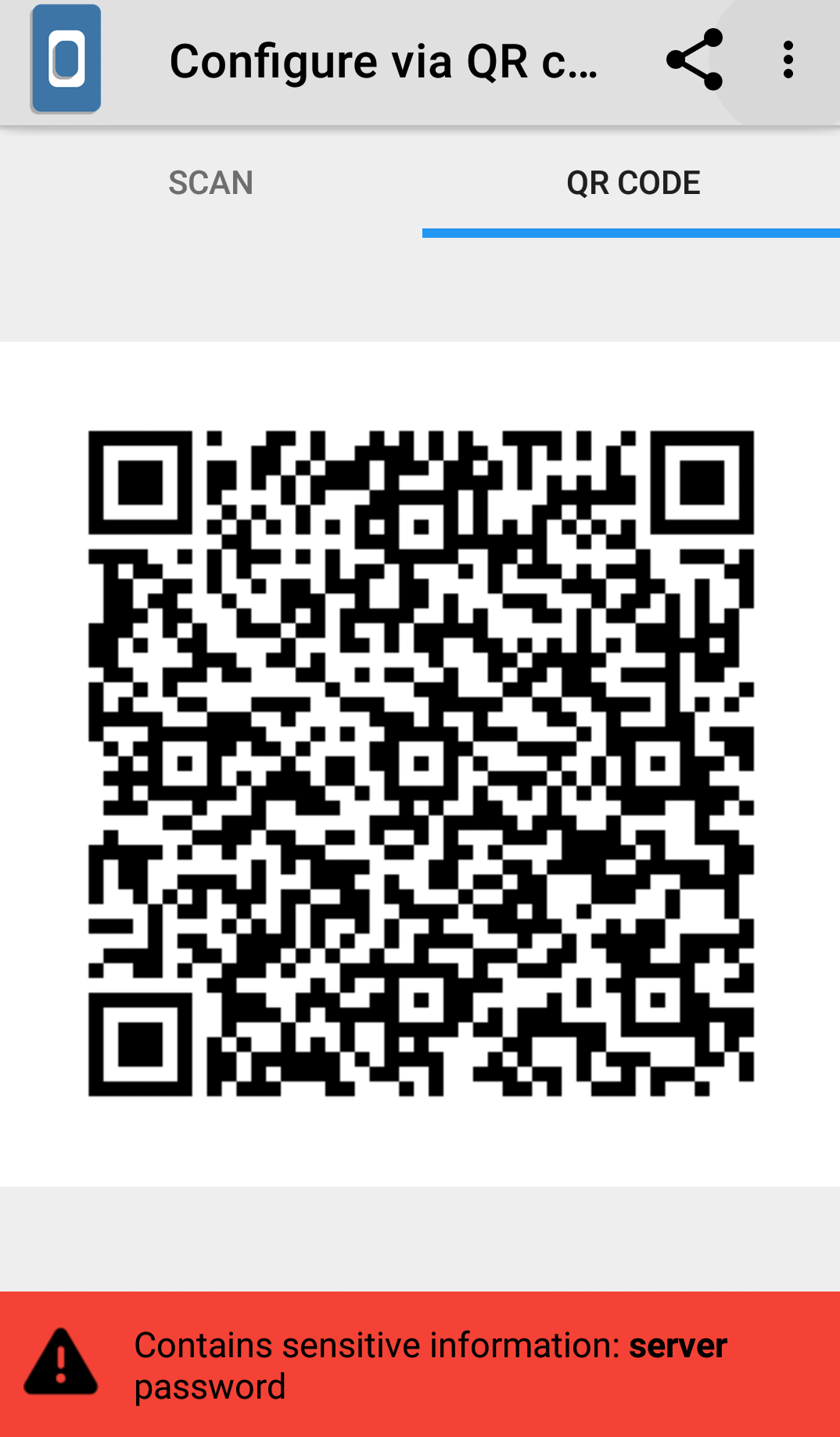 You can also copy the QR code and share it by email, Whatsapp, etc., to set up other devices but be aware that the QR code contains the password to your account, allowing others to sign into your account. It is not recommended to share the QR code through electronic means if the same account has permissions to view, edit, or delete data.

Setting Up Blank Forms in KoboCollect¶

Once you have configured the URL, Username, and Password in the app correctly, you can send blank forms to your device from the KoboToolbox server. 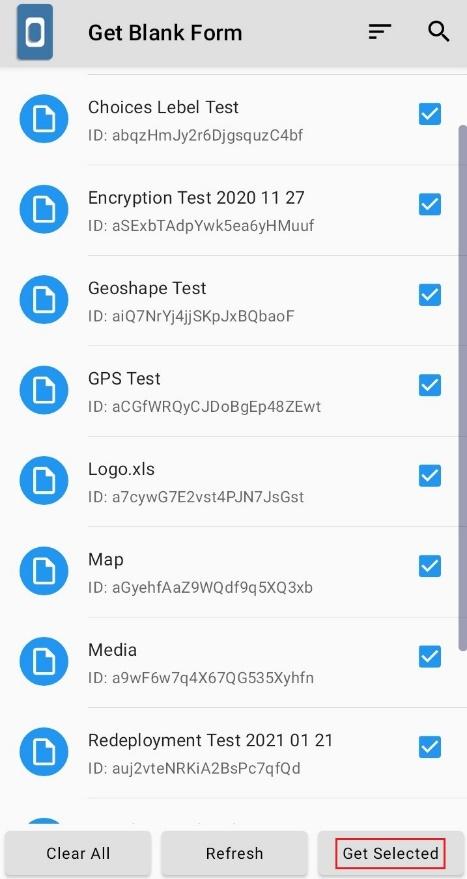 Users will need an internet connection while sending blank forms to KoboCollect.

Once you have blank form(s) in the app, you no longer require an internet connection to collect data. The blank forms and the filled in forms will stay on the device until you delete them from the app or submit them to the server. 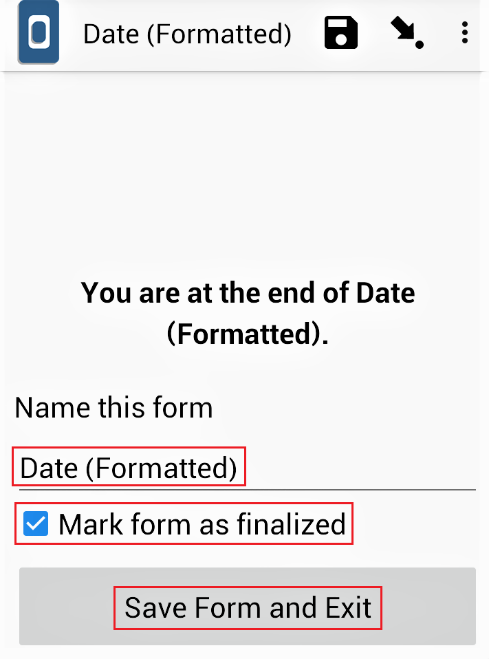 Make sure the form is marked as "finalized". If this is unchecked but you still select Save Form and Exit, the filled in form goes to Edit Saved Form instead of going to Send Finalized Form. If this happens, go back to Edit Saved Form, open the form, and without needing to make any edits, you can select Go To End. Make sure the form is marked as "finalized" and then select Save Form and Exit.
If an interviewer believes that a form has not been completed, for example, if the head of the household wasn’t there or children weren’t there but are needed for the data collection, they can rename the form in order to come back to it more easily. You can change the name of a saved form to something easy to keep track of, such as "Incomplete" or "Incomplete: (name of respondent)" under Name this form.

Once you have pressed Save Form and Exit, the saved form is automatically stored under Edit Saved Form. If you wish to edit this saved form, you can follow the steps outlined below.

Users do not need an internet connection while editing a saved form in KoboCollect.

Uploading Finalized Data to the Server¶

Once you have collected your data, and made any necessary edits, you can upload the forms to the KoboToolbox server.

Users will need an internet connection while submitting data from KoboCollect to the server.

Once you have completed data collection for your survey project and all the filled in forms have been uploaded to the server, it is recommended to delete the forms from the KoboCollect app. Keeping them in the app can confuse interviewers while collecting data for a different project. Follow the steps outlined below to delete Saved Forms and Blank Forms from your app. 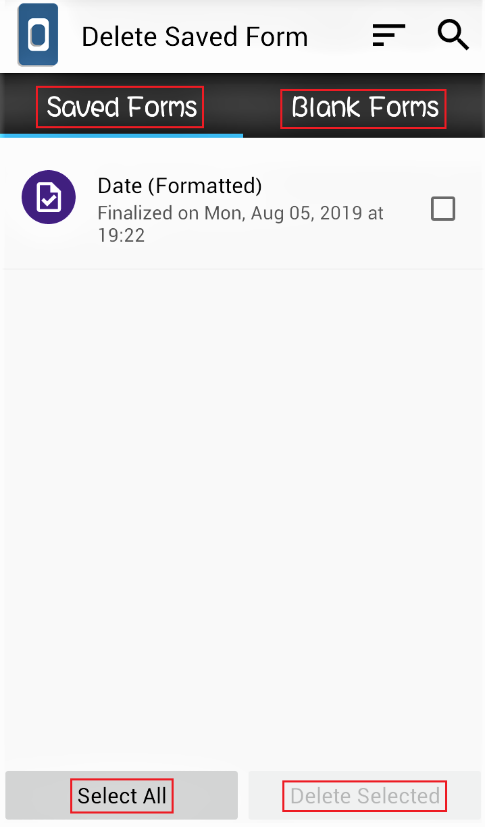 Users should not require an internet connection to delete saved forms in KoboCollect.

When you submit all the filled forms to the server by pressing Send Finalized Form, the successfully submitted forms can be seen in the View Sent Form section. Data managers generally advise to keep this information until the end of the project as it always provides a reference for the total number of collections and submissions. 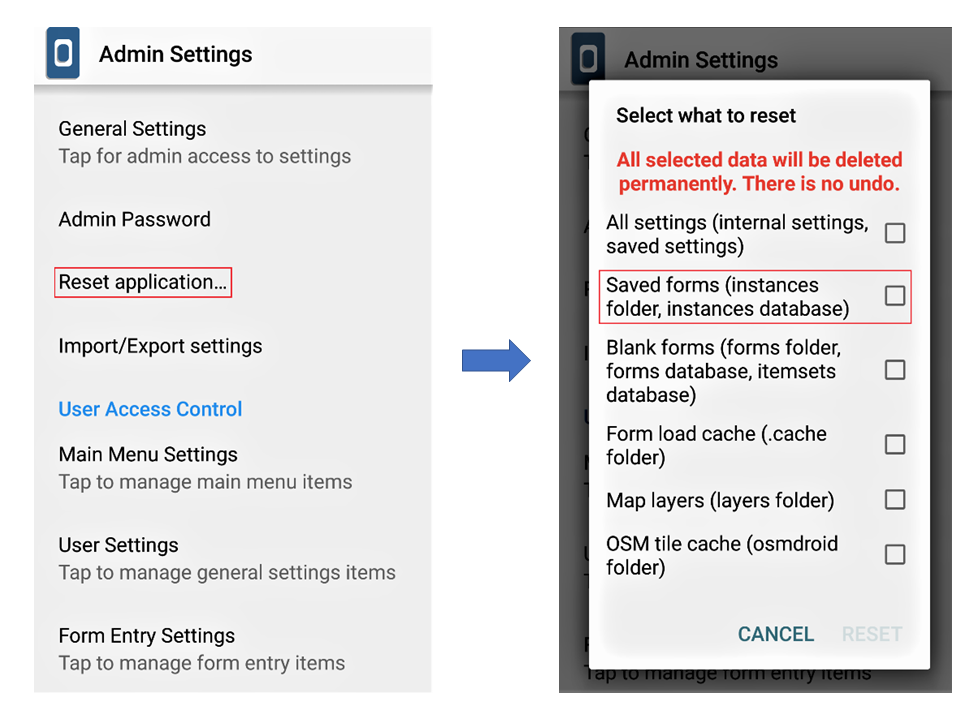 Users do not need an internet connection to reset View Sent Form in KoboCollect.

In some cases, it is recommended to hide certain buttons in the app from interviewers to prevent them from editing or changing collected data, decreasing the risk of data loss. 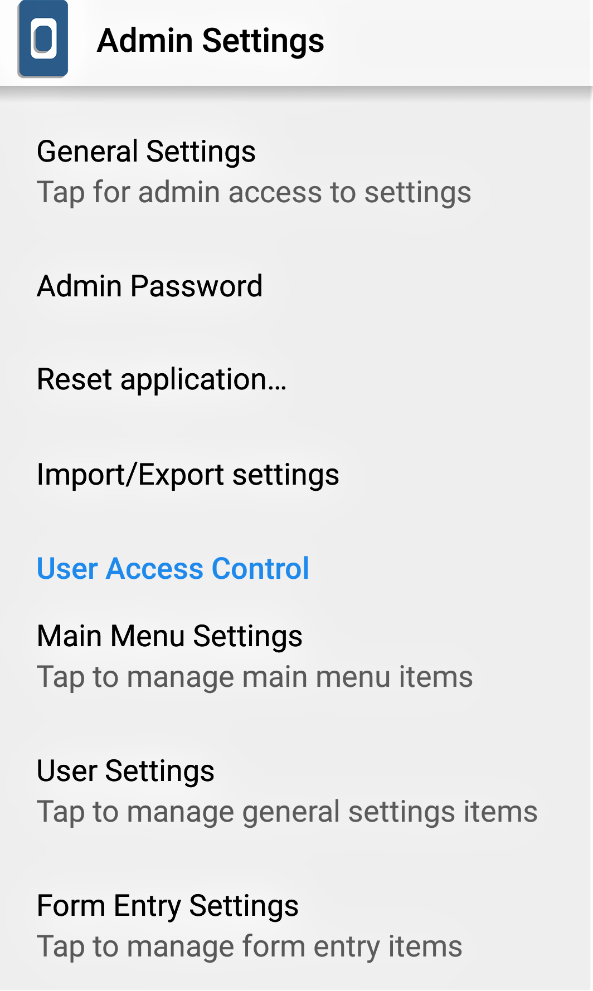 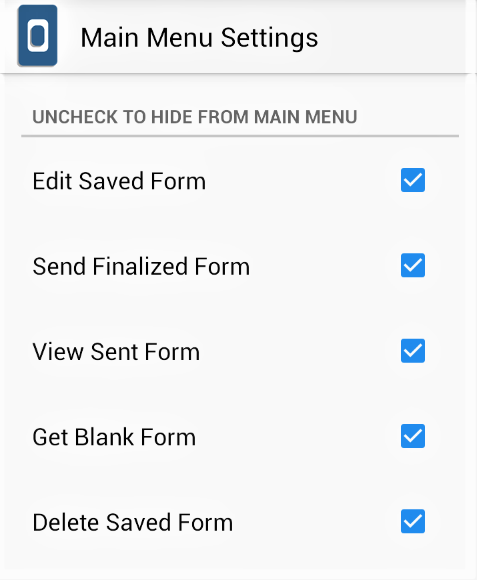 Users do not need an internet connection to hide buttons in KoboCollect.

If needed, you can set up an admin password in the KoboCollect app, limiting access to the app’s admin settings to only team members with the admin password. 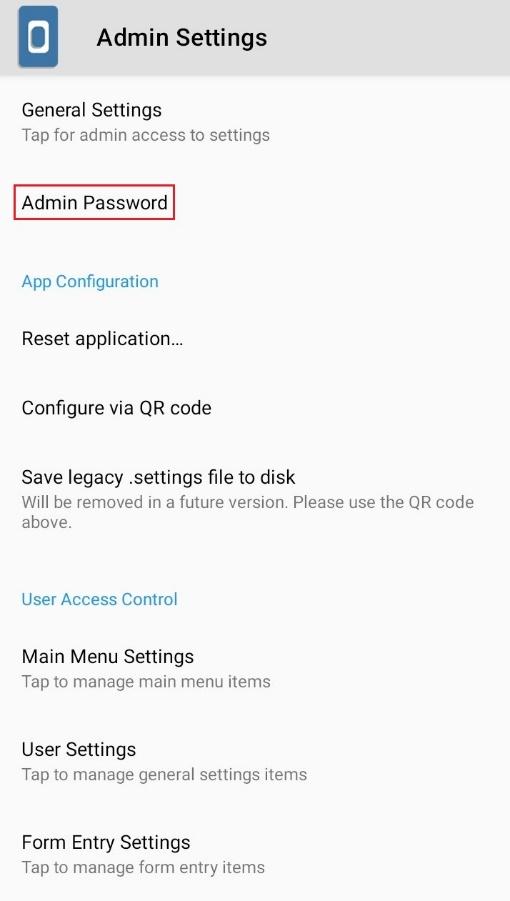 Users do not need an internet connection to lock KoboCollect with an admin password. To remove the admin password, leave it blank instead of providing a new password.

There are other form management settings available within KoboCollect which could assist in managing your data collection project:

Form update provides an option to update the survey form manually or automatically. If set to automatic, the forms that are redeployed on the KoboToolbox server are automatically updated in the app. Note that keeping this feature active will likely drain your device’s battery more quickly.

Form submission provides an option to send submissions to the server manually or automatically, with the options of Wifi only, cellular only, and wifi or cellular. This setting also gives the option to delete finalized forms and media after being successfully sent to the server.

Users do not need an internet connection to access or change the form management settings in KoboCollect.

Setting Up Metadata in KoboCollect¶

Users can set up the collection of metadata like username, phone number and email address in KoboCollect, providing additional details on who submitted the records to the server. These details can be helpful to validate the quality of the data collected by the team.

In order to collect metadata, it must be configured in both the KoboCollect app and on the KoboToolbox platform for the same project. Please refer to our support article Form Settings and Meta Questions for instructions on how to configure set up in KoboToolbox.

Users do not need an internet connection to access the metadata setting in KoboCollect.

KoboCollect is a fork of ODK Collect. As of today, there are no substantive differences between the two apps. Users are free to use either one for data collection. KoboToolbox is fully compatible with both apps.

Please note that it is not recommended to have both apps installed simultaneously as this could lead to some confusion depending on the Android settings.

Historically, there were several significant differences between the two. Back in 2009, KoboToolbox made several changes to ODK Collect, creating KoboCollect, such as cascading questions, hiding delete, and edit buttons for field data collection. The XLSForm was not yet an option in ODK Collect and KoboToolbox had built a formbuilder for all question types and advanced settings, including cascading questions, which were saved directly as an XML file for the mobile app. These changes were eventually incorporated into ODK Collect, along with many other great features. In 2014, KoboToolbox decided to fork ODK Collect to create the new KoboCollect, with minimal changes, including the KoboToolbox server in the configuration dropdown, a reference back to ODK Collect, and the KoboToolbox logo and name.

Was this article useful?

Did you find what you were looking for? Was the information clear? Was anything missing?
Share your feedback to help us improve this article!

Fill out the short survey here →

KoboToolbox on Your Computer or Server

Questions from the community

For issues, questions, ideas, or to read anouncements on new releases, please head to our community forum